Places for trip Galleries Museums Area Turiec
Menu
informations
contact
gallery
opening hours
tips on experience around
favorites
Comments (0)
interactive with map
share on
1 rating
13.11.2022 22:51
The Martin Benko Museum, as part of the Slovak National Museum in Martin, was first opened to the public in 1973 in the house where the artist lived and created from 1958 until almost the end of his life. During his lifetime, Martin Benka donated a substantial part of his collection to the state and at the same time wanted to preserve the authenticity of the premises in which the museum is located.
more informations

The Martin Benko Museum, as part of the Slovak National Museum in Martin, was first opened to the public in 1973 in the house where the artist lived and created from 1958 until almost the end of his life. During his lifetime, Martin Benka donated a substantial part of his collection to the state and at the same time wanted to preserve the authenticity of the premises in which the museum is located.

The Martin Benk Museum, as part of the Slovak National Museum - Museums in Martin, was opened to the public in 1972. It is one of the few museums in Slovakia where you can find an authentic interior inhabited by a significant cultural and versatile creative personality. The museum is housed in a villa belonging to the painter Martin Benk (1888 - 1971), who laid the basic pillars of Slovak modern art culture. The artist survived the last twelve years of his life, moved to it in 1959 and lived here until his death in 1971. In 1960, he handed over more than 5,200 oil paintings to the state in the form of a donation contract, and two years before his death the rest of his work. property. He also left cash, which is managed by the Martin Benko Estate Administration Commission, working under the Fine Arts Fund in Bratislava, and the artist assigned it to the annual Martin Benko Award and to purchase works for the collections of the museum bearing his name. 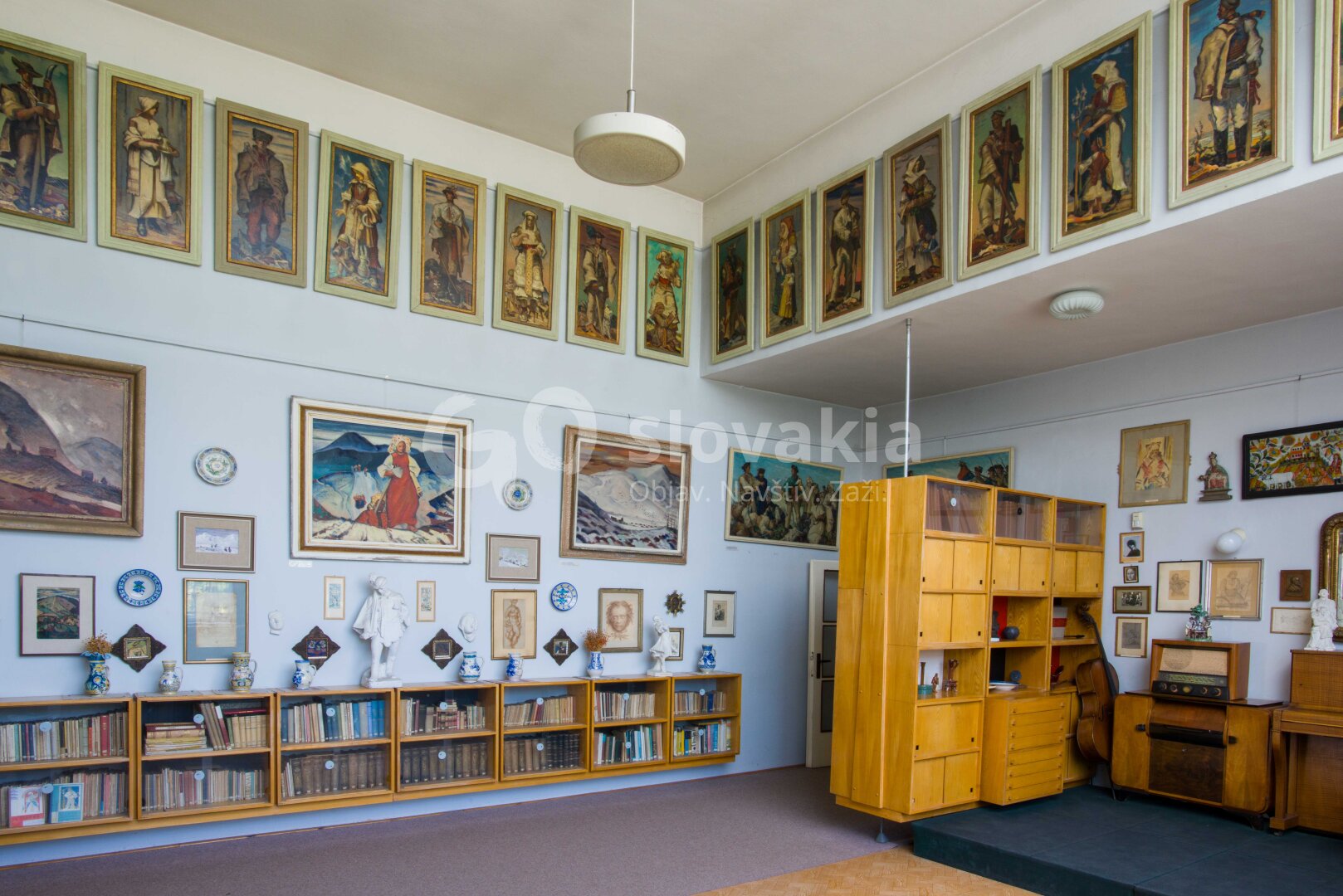 The artist dedicated his property and work to the Czechoslovak state "on the condition that it be preserved in its entirety in the house I live in, which will become a memorial museum of my lifelong and other work, in the fields of study and my endeavor. It is my will that this condition be fully respected even after my death. "In accordance with Benek's wishes, the Slovak National Museum in Martin preserves the interior of the museum as it inhabited it. In addition to presenting the most original and valuable for Slovak art and culture - Benko's works, the authentic appearance of the museum's interior brings the artist's personality closer. as well as personal comfort, housing and work, as well as hobbies and leisure.

Projects for Benko's house were designed by Martin builder Ivan Klein. However, his and Benk's artistic and architectural views were very different. While Benka, as evidenced by his sketches on the house, sympathized with the articulation of the building, which spiced up in Art Nouveau, Klein leaned towards simple, pure forms, closer to functionalism. Benka planned to place on a staircase in the vestibule or on the outer terrace of the house sculptures representing muses of art on a monumental scale, the small models of which he created and placed in the studio. Although the aforementioned builder did not reflect them into the form of the house, he accepted Benek's practical needs and ideas about the spatial division of the interior. These include several non-standard solutions that distinguish painters' houses from ordinary town houses from the 1950s. In addition to the bedroom and study, which was also a living room, Benko's house includes a large, impressive studio, a gallery, a more spacious lobby on the ground floor and a so-called housekeeping apartment for the family that took care of the artist.

The equipment of Benko's studio and work was designed by the artist and designer Ján Šimo-Svrček (1922 Spišská Nová Ves - 2006 Nové Zámky) in the first half of the 1960s. He was one of the proponents of utilitarian home furnishings of simple geometric shapes, devoid of any dysfunctional details. He designed artistically clean, practical and variable montisector furniture for Benko's private spaces. He complemented it with furniture by Viktor Holešťák-Holubár (1926 Spišská Nová Ves - 1989 Bratislava), which reflected very loose inspirations from Slovak folk furniture and the application of natural materials and handicraft techniques, for example - leather knitting, fur accessories, wool upholstery. 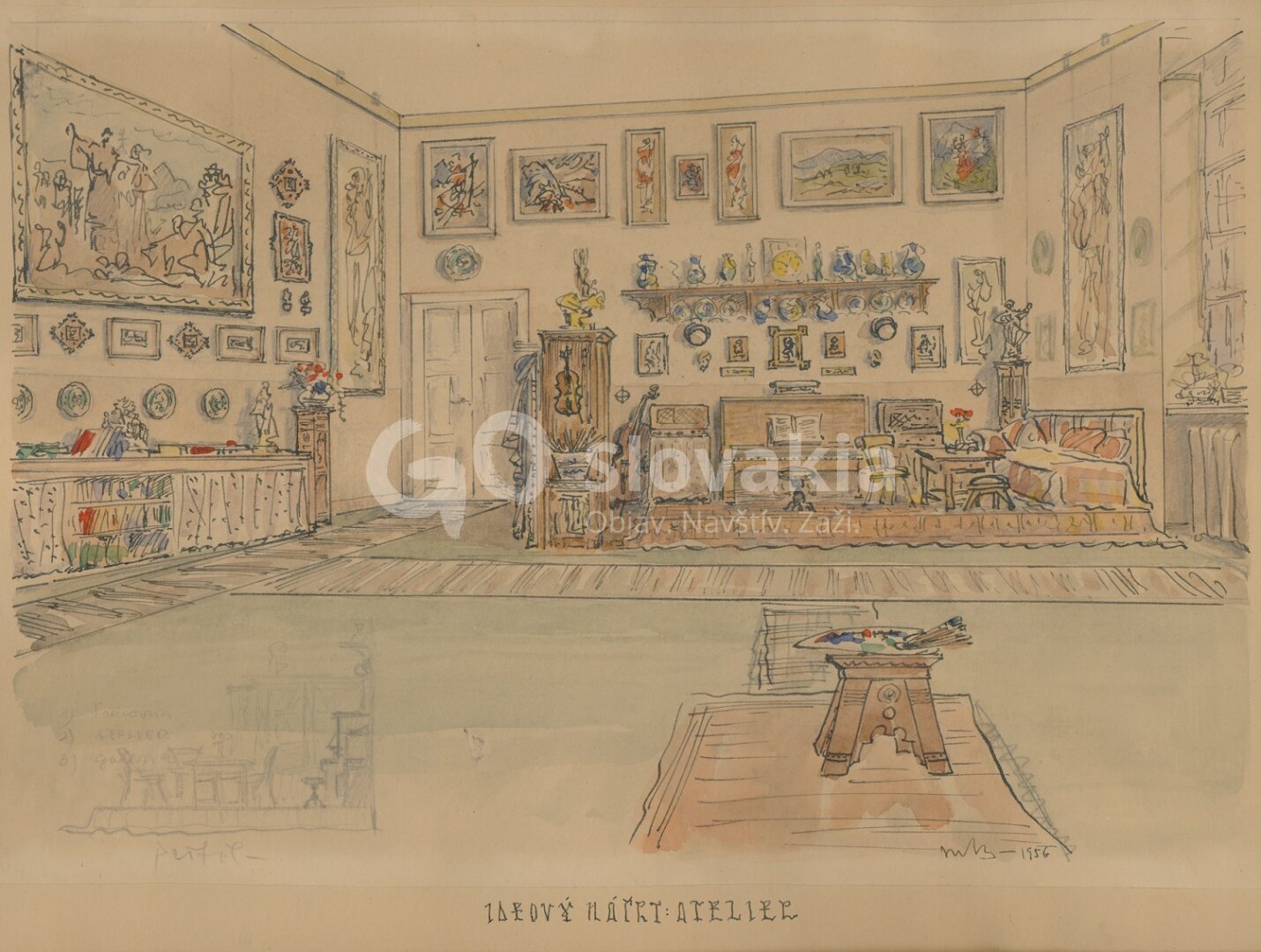 The combination of the furniture of Viktor Holešťák-Holubár and Ján Šim-Svrček created a visually interesting grouping of two period trends in furniture design. They correspond not only to each other, but also to several pieces of antique furniture that Benka brought from Prague, from where he moved to Martin in 1939. Both of these designers designed the furniture to suit the practical needs and demands of its user. It served to house a rich library testifying to a wide range of Benko's interests, as well as to present the results of collecting focused mainly on objects from the rural environment (extensive collection of ceramics, glass paintings, woodcarvings). It also corresponds with numerous musical instruments - for example, piano, dulcimer, violin, on which the artist also played those he designed.

The realized furniture, similarly to the construction, differed significantly from the original Benko's idea. From his designs for his own furniture from the 1950s, it is clear that he sympathized more with the more fragmented and massive forms and leaned towards more classic elements - more decorative than functional - such as cornices or half-pillars. The artist also projected ornaments and ornaments inspired by folk artifacts from the rural environment in which he often moved.

The Martin Benko Museum is currently under reconstruction, the scope of which is determined by the project, sensitively taking into account the peculiarity of the monument inhabited by a prominent artistic personality.